When you think of vacationing in Mexico it’s understandable that the first places which come to mind are Cancun, Cabo San Lucas and Puerto Vallarta, but that’s all about to change. Since 2001 Mexico’s Secretariat of Tourism has been working to promote what has been dubbed the Pueblos Mágicos (Magical Village) scheme. Beginning, at first, with only a few and now including 83 villages, this scheme showcases the true flavour, history and culture of Mexico.

The contribution of these Pueblos Mágicos to the patrimony of the nation is a great source of pride for many.

One Pueblos Mágicos which is fairly easy to get to from the main vacation destination of Puerto Vallarta is San Sebastian del Oeste. Built in 1605, during the early Spanish conquest, this mining village has a huge amount of history to be proud of, and this can be seen in the architecture as well as in the museum. The Church of Saint Sebastian was built in 1608 and has stood ever since, overlooked by the Sierra Madre Mountain Range. The Corinthian columns and intricate details make it a must see for any architecture buffs out there! 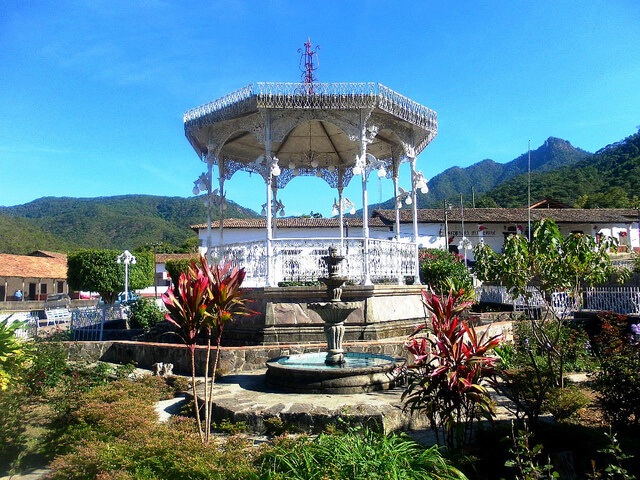 For those more interested in the social history of the town there is the House Museum of Doña Conchita Encarnacion which is home to a huge number of personal items once owned by prominent families of San Sebastian. This once bustling town used to house 20,000 people so you can imagine just what can be learned about the town from such items!

These days San Sebastian del Oeste is home to only 600 people and peace and quiet is one of the most abundant resources to be had. Nonetheless the spirit of this Pueblos Mágicos remains the same, and the central plaza (as is so often the case with these Magical Villages) is the heart of the town. The temperatures are lower in San Sebastian than down at the coast in Puerto Vallarta, but the heat of the day may still get too much for you. If so you can relax amongst the lush vegetation of the central plaza and bask in the musical trickling of the flowing stream that passes through.

The truth is that whether you are picking fruit from the orchards of Hacienda Esperanza de la Galera or drinking coffee in the Quinta Mary you can be sure that San Sebastian near Puerto Vallarta will delight you at every turn.