Have you ever wondered what amazing things there are to do in Cancun, Mexico? The Pirate Ship Jolly Roger is a fabulous night out for all the family, with great food, fantastic entertainment and fireworks. It is the perfect Cancun activity.

The Pirate Show Cancun Jolly Roger takes place on one of the most authentic pirate ships in Cancun. The vessel is a faithful replica of the Santa Maria, which was one of three ships that joined Christopher Columbus on his adventures to the Americas in the sixteenth century. Although the pirate ship is made of steel beneath its facade, with all the safety features of a modern vessel, the outside looks like a traditional wooden pirate galleon. The Jolly Roger, really is a sight to see on Cancun’s horizon. 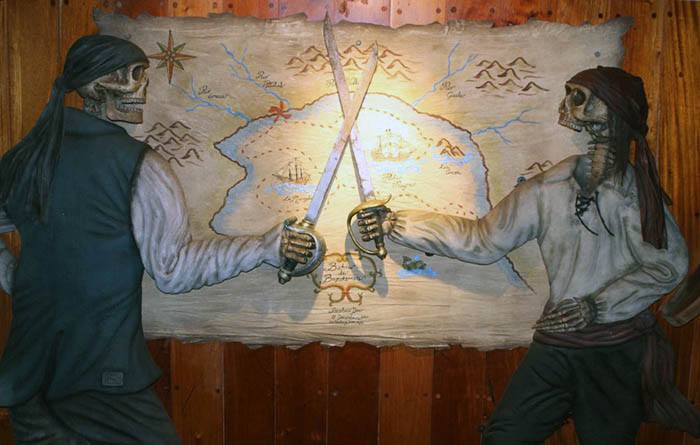 The Pirate Ship Cancun departs from Playa Linda Pier in Cancun every night, taking visitors from all over the world on an adventure on the Caribbean Sea. There is a bilingual show of pirate betrayal, sword fights, swashbuckling humor and a guaranteed walking of the plank for some unsuspecting pirate. From the minute you step aboard, you are transported into the world of dastardly Caribbean pirates.

The Pirate Show Cancun Jolly Roger also includes an all inclusive bar and a choice of meals. You can enjoy a range of menus which also cater for vegetarians and kids. You will have dinner in the belly of the galleon, which is decorated to reflect what life would have been like in the old days. Throughout the show, your pirate waiter will make sure that your “grog” keeps flowing, as a free bar is included in your ticket.

A vacation in Cancun is just not complete without exploring the amazing coastline; and what better way to do so than via pirate ship!